Where Do Leads Come From?

Remember being on campus and seeing a bunch of tents and tables in that wide-open space? Maybe the smell of a grill going or pizza boxes stacked up taller than the latest basketball team recruit?  Remember seeing a bunch of people standing around in matching outfits, maybe a few throwing a frisbee around, a few banners hung? Remember milling around and wondering whether you should check it out, or oh wait, “I remember seeing a flyer posted about this event on campus or a text or email I got that said, hey, you should join us today on central campus.” Did anyone actually attend this event?  Or better yet, did anyone actually make a connection at this event? If you answered yes to one or both of these questions, amazing! But then I would ask, do you know what the purpose of the event was, or what to do next? How many connections did you actually make? Or do you just remember seeing the kid from high school that played on your soccer team? And then the even scarier question, who did I say I would text later about our next event?

Whether you’re trying to grow your chapter by 5 members or 50 members, it’s important to understand what connections you are making and with who.  Plain and simple: where do your leads come from? Traditionally, chapters have generated leads from two types of pipelines: (a pipeline is an organized, visual way of tracking multiple prospective members (leads) as they progress through different stages of the recruitment process)

But do we really know if these two pipelines are working?  Or are we just spending dollars and time preparing for events that aren’t generating that many leads for us?

Data pulled straight from our technology tells us that on average, about 10% of your names list joins your organization. So if you are recruiting 5 members, you need50 leads on your names list, and if you recruit 50 members, that’s 500 leads. So why aren’t we ensuring we know what pipelines our leads are coming from and if they’re actually working?

The answer is that we often do this because “This is what we’ve always done.”

We have analyzed chapters that have implemented a year-round recruitment strategy, and we know the following.  Leads traditionally come from…their friends (referrals). 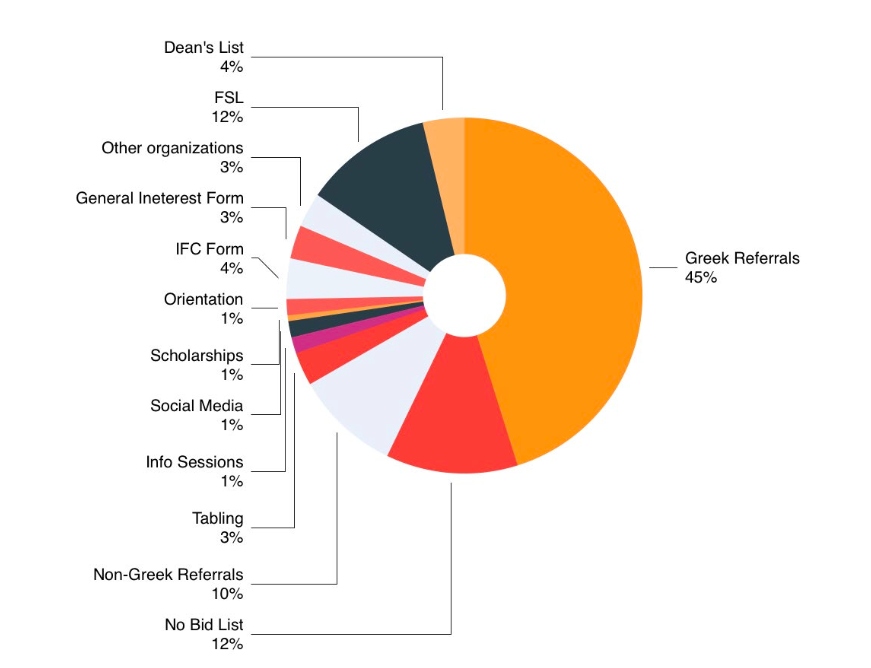 Until now, we didn’t have a way to share where our leads came from until the end of every academic year when we compiled our annual growth report.  What surprised us the most was that leads weren’t coming in from tabling events or Meet the Greeks nights.  They are coming in from other pipelines. See above graphic.  Pipelines where our prospective members are actually spending their time.  Social media and with their friends, otherwise known as referrals.

With the launch of the new chapter version of ChapterBuilder, we can see our leads coming in and, more importantly, where they’re coming from in real-time.  ChapterBuilder’s referral report shows where recruitment teams focus their efforts and how many relationships stem from those referrals. The report also shows us where our leads are in their journey toward joining our organization. Is it worth spending our time collecting referrals from source “x”. If we aren’t getting leads or we aren’t getting leads that are converting to joiners.  And why? Is it us? Is it the referral source? For example, if I get 50 leads in an hour of tabling but all of them become E’s or F’s was it worth that hour of time?

With so many opportunities on campus for students to get involved and be leaders, we have to be intentional about where we find our leads, and it might be where we least expect it.  So create a form, or two or three, and find out where your prospective members are hanging out and start creating pipelines that actually work for you.

It’s the start of a new recruitment season, so you (and everyone else) are trying to get new names.

The first two are about as self-explanatory as it gets. The third is quite the opposite. Forms give you the ability to add names hands off, in your sleep, in infinite ways. But despite this…

The majority of our CB partners only create one interest form, max.

They usually give it a generic name and blast it on all of their social media, website, and texted to the relevant people.

That’s not “bad,” per se. When paired with the right strategy, it’s doing its primary job – getting more names. You can still spread it all over the place.

Let’s start by assuming things are going well. The form is blowing up with leads. You’re setting up meetings, finding yourself continuously asking your leads “how’d you hear about us?” hoping they’re not vague and somewhat helpful. You either ask it every time, or accept you won’t know.

When people start to ghost you (maybe feeling like your outreach was too generic) you don’t have a sure-fire line to pull them back in.

You also have no way to credit which tactics were worthwhile and which were a waste of time. You’re finding yourself trying to remember everything or wasting time logging it on your own.

And again, this is best case scenario.

So what about if things aren’t going well?

It’s simple. You have no idea why. Is your form actually getting in front of potential members? Is it just sitting on some social media account only your members look at? Is only one person trying? Is anyone trying?

You can’t know what’s wrong if you only have one form. It might just be an effort problem. More forms will immediately shine light on what you need.